Squeal!  An over the moon thank you to Rainier Springs for making this incredibly informative training possible!!!  Also Royal Oaks Golf Club ambiance was sweetness all around as was their beautiful staff and talented chefs who delivered scrumptious food!!!

Jim Jensen covered a lot of useful information; emphasis on approaches to reduce stigma so individuals feel safe talking to us about their use. He reviewed the sympathetic and para sympathetic systems and the how the axon/dendrites and neurotransmitters work in our brain including how drugs are slippery liquid solubles that trick the brain into allowing them past the blood brain barrier!  He was thorough beyond belief to make sure we were all on the same page!  He recommended we have a copy of Uppers, Downers All Arounders by Dr. Daryl Inaba to refer back to! 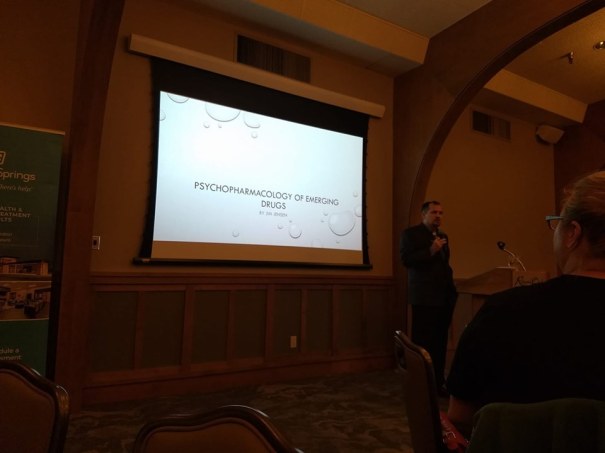 He provided groovy examples to help us understand how drugs alter our brain. For example a first time snowboarder who used meth and decided to snowboard as if she had done it many times before only to tumble all the way down the slope. “It’s like a dose of bad judgement.”  How our pupils dilate open because we want to see everything!  How the limbic part of our brain is where the reward area is.

He offered an example of “having to go pee”.  We wait as long as we can. The longer we wait the more we have to go.  Going pee is an “essential need” he points out.  When we finally go pee we experience what? The riveted audience lets out a sound of tremendous relief!  That is what drugs become to us when we cross over into addiction.  Drugs become an essential need.  “Our brain literally says thank you for doing something that is essential.”

We giggled and laughed at the thought of our pee moment bringing about a mild “euphoria!”  We laughed some more and talked about it as we stood in line following a much needed break!  I recall thinking imagine if we were not allowed to go pee.  That would be horrible.  If drugs are like that – mental note to remember that as I sit across a client who is jonesing for their drug as they go through the post acute withdrawal symptoms.  Jim Jensen helped us be more empathetic and gentle towards others.

Plus, you know me – I absolutely loved that he spent a significant amount of time on smoking as well as vaping!

“You lived on the streets. You stopped injecting…! Can you quit smoking? Nope.”

Jim helped us to understand why smoking and now vaping is so hard to quit!  He brought up how vaping is going through very similar history like cigarettes.  History that took years to evolve; cigarettes are safe, later found to be unsafe and then deadly.

Last example;  is vaping safer than smoking?  Jim shared a hypothetical situation.  Imagine I say I am going to drive 100 mph going backward down Fourth Plain.  You would think that person is crazy, right?  Well imagine the exact same scenario but this time I am going to wear a seat belt!  Mhm – less crazy???

The Mindful Smoking includes a vaping assessment.  One of the questions asks if the vape was harsh on your throat the first time you vaped.  Then asks is it no longer harsh?  Many PCC students have reported that it was harsh – some continued to use nicotine in vape form while others went back to cigarettes because it was too harsh.  I looked it up and the recommendation from websites that promote vaping acknowledged that is a common experience.  Their solution “Vape more?”  Yikes!

We know so little about vaping it will be interesting to look back 20 or 30 years from now!

Jim Jensen covered so many other drugs in such detail!  I would strongly recommend you make it a point to attend one of his presentations!!!  In fact he will be presenting on Ethics in the near future!  Check out Rainier Springs for more details!  https://rainiersprings.com/news/

About Grace On You

Guadalupe Aragon
Grace On You